Sheikh Hussien, North Jordan (March 28th, 2019) – The Italian Embassy in Jordan, Gariwo, EcoPeace Middle East and the Governor of the North Shuna Directorate, honored two individuals, a Jordanian and an Italian, who have rescued and aided in reducing the suffering of refugees. The ceremony took place in the Sharhabiel bin Hassnah EcoPark.

Major General Jehad Mattar was greatly involved in improving the humanitarian conditions of thousands of Syrian refugees in Jordan. His work includes overseeing the implementation of projects that improved the living conditions and infrastructure in the refugee camps and surrounding areas, creating a projects database related to the camps and surrounding areas, and developing national plans to respond to all refugee issues, including security, voluntary repatriation, residence, resettlement and humanitarian services.

Vito Fiorino, a carpenter and fisherman, saved the lives of 47 drowning migrants during one of the worst tragedies on to occur on the Mediterranean Sea where hundreds of migrants lost their lives. His brave actions allowed the refugees to survive safely and migrate to Northern Europe. Despite the fact that the refugees live far away, they visit him every year on the anniversary of this event, where they call him Papa. Fiorino has never stopped calling for major institutions to be more committed in solving the refugee crisis in Italy.

To start off the ceremony, EcoPeace’s Jordanian director Yana Abu Taleb, the governor of the North Shuna Directorate Rakan al Qadi, and Manuela Rippo from Gariwo spoke about the honoree’s work. Following that Mr. Jehad and Mr. Vito spoke about their unique experiences working with and rescuing refugees and migrants. 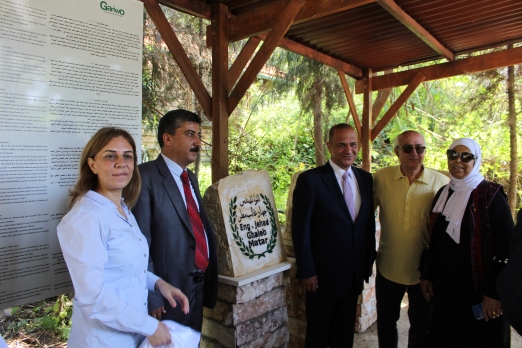 After the speeches, the honorees had their names inscribed in stone and a tree planted in their honor as part of a ceremony to honor their important work.  The stones were placed in the EcoPark’s “Garden of the Righteous” which was founded by Gariwo and the Italian Embassy in 2017 to honor the following important figures:  Wasfi Al Tal and Moath Al Kassasbah, Rox bin Al Azizi, Haifa’a Al Bashir, Zaha Jarnadaneh Manko, Anis Mansour Muasher and Ismail Khader. To cap off the event, the honorees and other participants were treated to lunch and were given a tour of the EcoPark.