During the week of July 6th to 12th, 2016 six youth representatives from EcoPeace Middle East’s transnational Good Water Neighbors program traveled to Berlin, Germany to participate in the 2016 Berlin River Camp, a program aimed at encouraging students from many countries to engage together in international dialogue on water protection policies. The EcoPeace team was made up of three coordinators and two students from each of the three partner branches of the organization in Jordan, Israel, and Palestine. 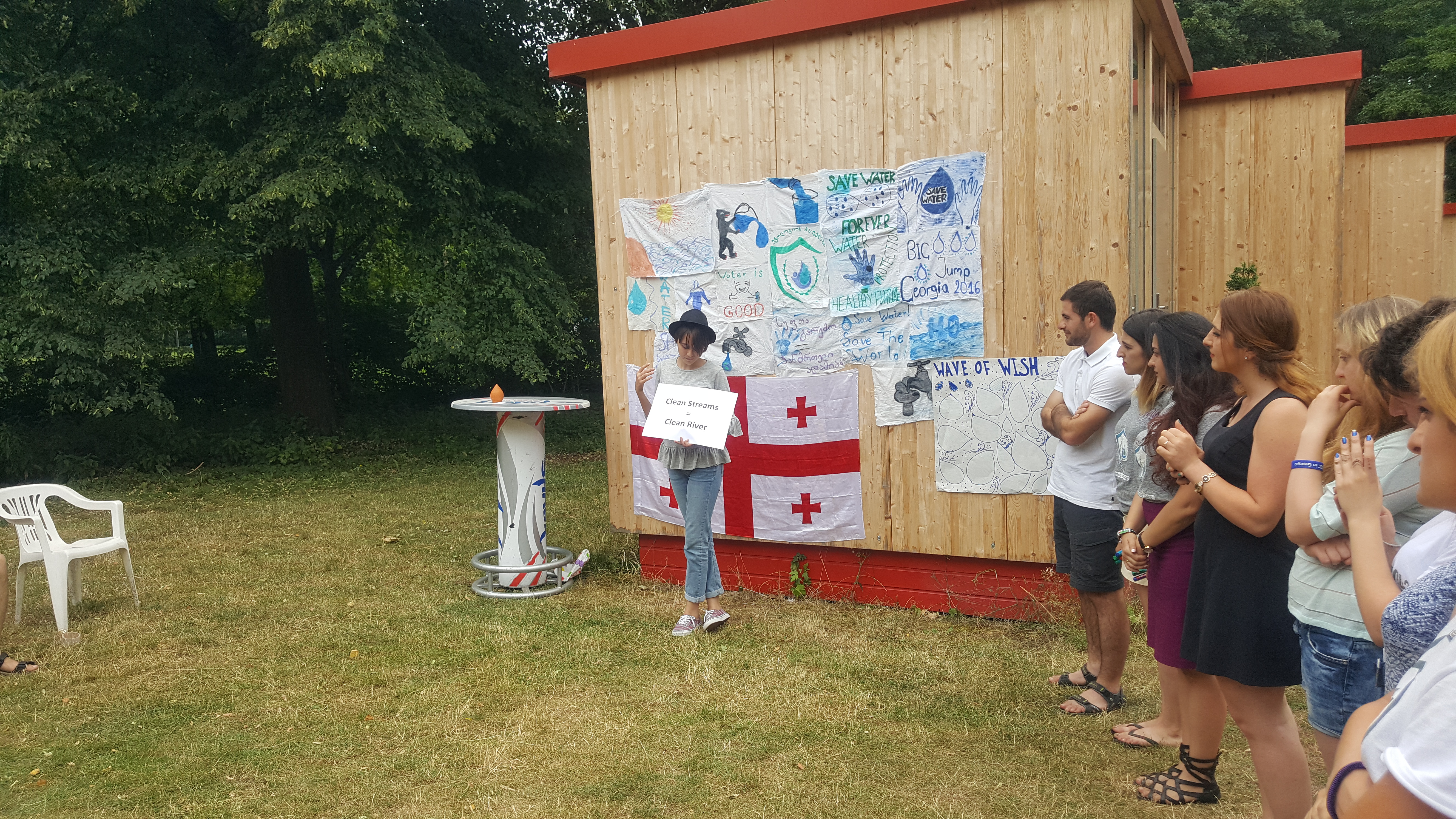 The students participated in many activities, including a trip to the Berlin River and presentations about both pressing environmental challenges and the initiatives aimed at strengthening public engagement with the river. In addition, the students had the opportunity to learn simple methods of water quality testing meant to detect the kinds of pollutants in the river. Mohammad, one of Ecopeace’s participants saw the learning experience as a very informative one, saying “we brought a kit that’s used to measure the concentration of various elements in the water and calculate the percentage of the pollution the water suffers. I think EcoPeace…should have a kit like that because it’s very practical to follow up with the water improvement if any happens in the future and we can have scientific documentation of our work on Jordan river improvement.” This experience highlighted the importance at the camp of not just of inspiring students to act in their home communities, but also giving them the tools to pursue relevant knowledge themselves. 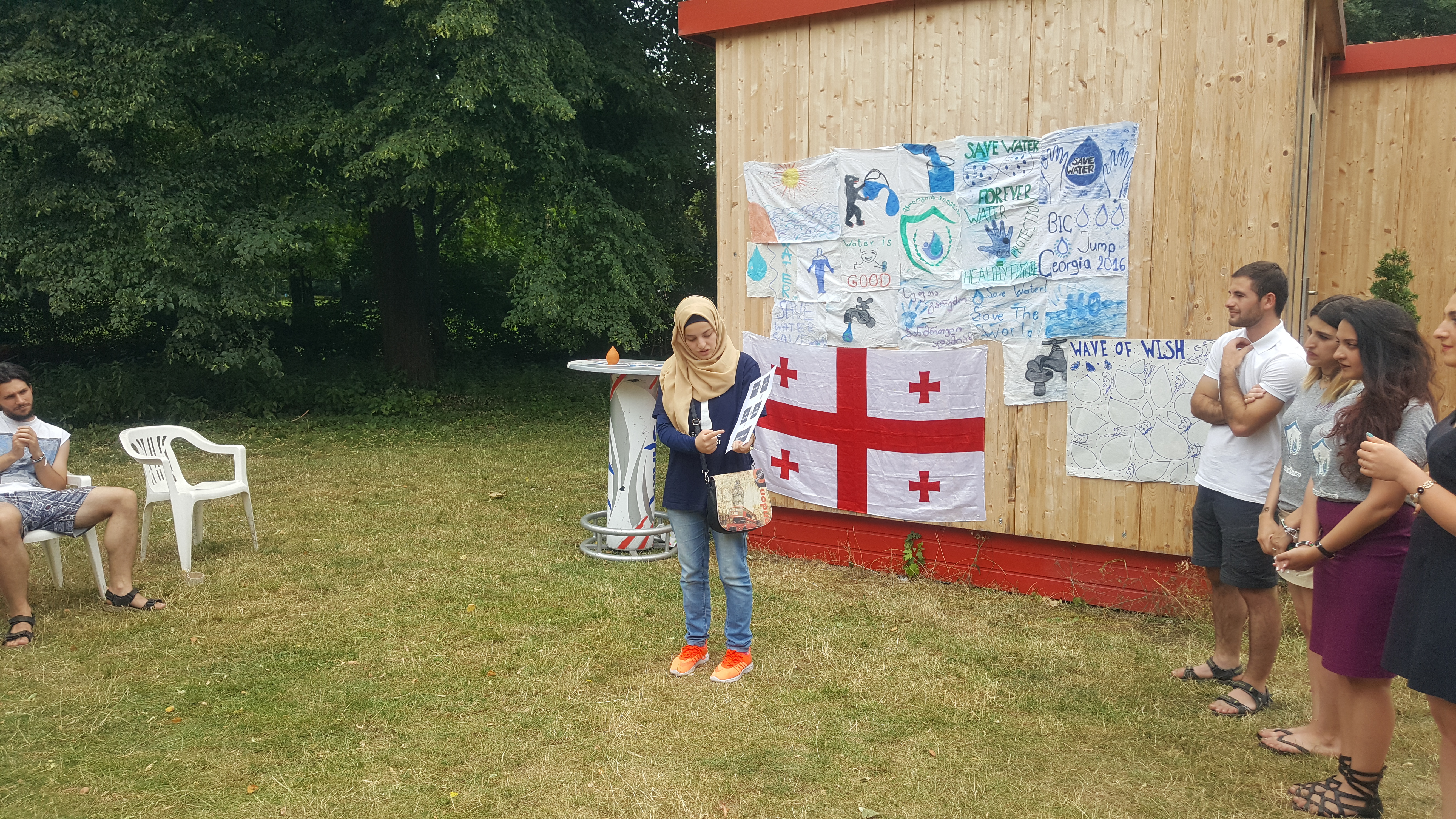 Perhaps the central event of this week however, was EcoPeace’s participant group’s opportunity to briefly present some of the water challenges that the Jordan River Basin faces through  a short speech and a video at the German Parliament building on the third day of the trip. Both the parliament members and most of the participants from other countries were impressed by the presentation, the core of which was about “Water Conservation as a tool for Peace in Times of Crisis” as Mohammad described it. For the audience, transboundary cooperation over water between Palestinians, Israelis, and Jordanians made them feel that if such political and environmental challenges can be overcome in the Middle East, there is a great deal of hope for similar successes in other parts of the world as well. The presentation was followed that night by an intercultural dinner, where the camp’s participants got to share some of the music and food of their cultures with their international peers. Salar, one of the other participants recalled “we brought dates Brazg, and Ghraybeh with us and it blew everyone’s mind and we had such a wonderful time telling people about our [culture].”

After a day given over to the participants to explore the city on their own, the students from EcoPeace participated in an activity called the Big Jump, where students from all the different nations represented at the camp got to jump together into the Berlin River while another group stood holding a banner from on top of the bridge beside them prepared beforehand to proclaim messages about the importance of cooperation over water.  The participants from EcoPeace finished off the day with a visit to the old Berlin wall, learning about its history and the difficulties it brought to the lives of the citizens of Berlin in those days, reflecting on the walls much closer to home in the Middle East that divide them. The final day of the trip brought with it another opportunity for the student participants to demonstrate their creativity in the development of an application meant to inform people about where the best sites for swimming in the river are located, what the quality of the water is like, and all the information necessary for people to have the best possible access to the river. As a result the participants and students productively shared ideas and designed a model of that application. Salar had some experience as a game developer and so was able to contribute some of her unique expertise in testing the application. 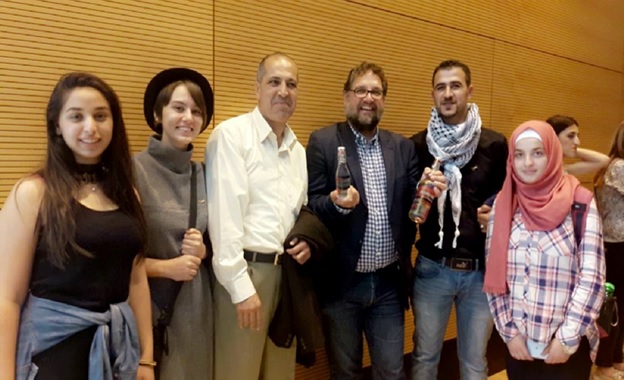 A sometimes challenging but overwhelmingly rewarding experience, the Berlin River Camp gave its participants an invaluable opportunity to discuss and put into use their notions of good water governance and thoughtful conservationalism with their peers from across the world. In the conclusion of her reflection on the trip, one of the participants Liron said the following: “Now I challenge you to open your eyes, pay attention, and do not take water for granted…we need to not just look at what is happening in front of us, but lift our eyes, looking, paying attention, and think about the future.  If each of us really does these things, I am sure that we will make a better, more pleasant future for ourselves.” Liron’s words communicate well the spirit of international cooperation and devotion to the protection of our natural resources that was at the center of the Berlin River Camp and stand as a testament to the deep commitment that all of EcoPeace’s student participants demonstrated during this trip; a commitment that was strengthened during this trip, but which they will continue to carry with them into their daily lives.

This article contributed by Skylar Benedict. Candidate for Masters of Arts in Arab Studies,Georgetown University,Edmund A. Walsh School of Foreign Service.