In the 1800s, a man named Iskandar Abu Zabura used the river next to his watermelon patch to transfer his fruit to the sea. His namesake port would export four million melons to other Mediterranean countries each year. Though the Iskandar (Alexander) River and the port still exist today, the legacy of Abu Zabura is slowly dying.

EcoPeace conducted a youth cross-border event for the Alexander River, which begins in Palestine, fed by Wadi Zomer and Wadi Tin. The river flows from the West Bank through Israel and into the Mediterranean. It hosts a variety of flora, fauna, and aquatic life, preserving vulnerable and endangered species such as African Softshell Turtles. Currently, it is also subject to all sorts of pollution: industrial waste, toxic chemicals, quarries, and olive production waste. Though many would like to save the region, there are complicating factors that slow progress. The ongoing conflict diverts the attention of decision makers and makes cross-border initiatives more difficult to enact. “We don’t get into politics but politics gets into our work” a Palestinian EcoPeace member explained.

EcoPeace runs the Good Water Neighbors Project in order to raise awareness and pressure regional councils to preserve this delicate ecosystem. At the end of May, an event brought together youth from the upstream community of Tulkarem with the downstream neighbors of Emek Hefer. These high-school students spent the day learning about the region, their shared responsibility, and mutual concerns. It was an exciting event for one Palestinian who said he has seen the sea three times before and was looking forward to getting his feet wet.

At the beginning, when I asked an Israeli and a Palestinian where the pollution in the river comes from, they were each quick to accuse the other side. One girl told me that the wadis by her home are “stinky” and that they “own the smell but not the factories”. After a session by the ocean and a briefing by the Palestinian and Israeli Wadi Zomar and Wadi Alexander Coordinators , the students began to see things differently. “The ocean gives and the ocean takes; you get what you give” the same student reflected. After meditating by the sea, students expressed feelings of peace, blessings, and freedom.

The event offered the youth first-hand experiences including a visit to the Israel Sea Turtle Rescue and Rehabilitation Center. The guide gave a tour of the facilities and explained about different species including various turtles, sea horses, and a variety of corals. 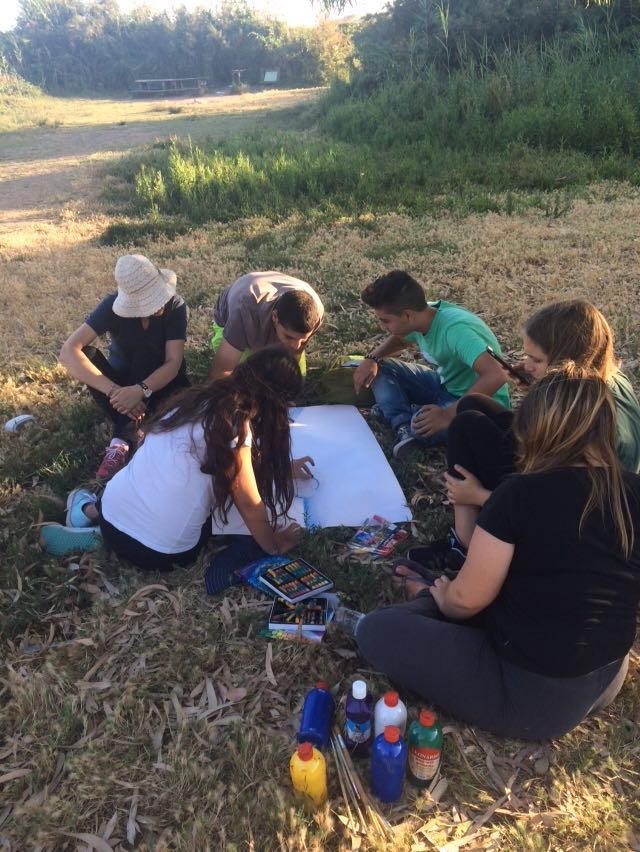 EcoPeace’s hydrologist helped students run tests on the stream water using Nitrogen strips and pH paper. After a discussion of their common interests in the wadi’s environment, students were asked to make posters. One group demonstrated how water binds the communities while the other depicted Abu Zabura over time, dismayed at the current state of his river. EcoPeace will bring the student’s work to a meeting with the head of the Regional Council in an attempt to apply pressure for policy change. They hope that the youth’s message of coordinated action will inspire decision makers to pursue more environmentally sound practices. The message of the event was clear: the politicians can fight over polluted resources or cooperate to enjoy clean ones.

Amanda Lynk is an intern in the Tel Aviv office while she studies for her MA in Conflict Resolution and Mediation.