Speech by Member of Knesset Omer Bar Lev during the “International Conference on Sustainable Development in the Jordan Valley” organized by EcoPeace Middle East. 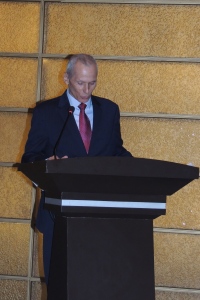 I would like first to use this opportunity to say a few words regarding what we are experiencing in Israel mainly in Jerusalem in the last few weeks.

Israel has no intent to change the Status Quo at Temple Mount. Israel’s Prime Minister Mr. Benjamin Netanyahu clearly repeated it several times in the last couple of weeks. Unfortunately several Israeli politicians used the much tensed atmosphere in Jerusalem in order to promote their personal political agendas and I am very sorry for that. But I urge us all to listen and focus on Israel’s Prime Minister declarations alone.

Having said that, I would like to add that the very sensitive and tensed situation we ran into is first and for most due to the political stand-still and freeze we experience in that last years and to the long discrimination of the Palestinian quarters in East Jerusalem.

These are neighborhoods with lack of proper municipal services not to be provided by the municipality Jerusalem Municipality because some of these quarters are beyond the fence crossing the urban area.

These quarters are as well suffering from lack of services from Palestinian Authorities because they were annexed to Israel. The result is that in some of these quarters there is no law and no order and instead crime and terror exists.

There is no doubt in my heart that apart from keeping the Status Quo on Mt. Temple we have to discuss and promote the political solution with the Palestinians including the separation from the Palestinian quarters in East Jerusalem.

The Good Water Neighbors Project can be and should be the flag for Cross-border and trans-national solutions. We, the three nations, Jordan, Palestine and Israel live side by side in a very dry area sharing the same water resources. Each of our nation’s water consumption influences and is influenced by the water consumption of the other. If we will not be able to achieve our common interest we will dry ourselves to poverty and destruction.

Water is the source of life, if we will not be able to share this source not only the deserts around us will cover us but terror and fear will rule our region.

I believe that it is not only the need of each of our nations to have its own sufficient water resources but it is as well the interest of each of us that the other two nations will have their as well.

After the last very difficult summer we all experienced, it is most important to focus our efforts on Gaza Strip. Strengthen the Palestinian Authority confronting Hamas in order to reach a situation in which the Palestinian Authority led by Mahmud Abas leading the West Bank and Gaza Strip together in order to reach an agreement of two states for two nations.

In order to reach a significant change in the southern part of Israel and in Gaza Strip we have to achieve a ‘deal’ if I may say so. For the time being not a peace agreement, not the end of the conflict, but an agreement in line with the goals declared twice by the European Union during the last summer. And the deal in the south should be for both sides what they really need and desire for: Gaza needs immediate rehabilitation followed by a significant development plan that will enable the Palestinians in Gaza to reach water and energy independence as well as open the Strip to the World. Meaning deep water harbor and an international airport. And for Israel the need for a long term ceasefire, 10, 20 years of Hudna if I may say so, to demilitarize the Strip from potential hostile capabilities against Israel (by the way as agreed in the Oslo accord) based on US control to the demilitarization.

We must acknowledge that an exceptional constellation of regional and global interests exists, most of which have nothing to do with Israel, which offers an opportunity to stabilize our small part of the Middle East:

– to strengthen moderate forces – the  PA

– and to weaken extremists – the Hamas.

The Good Water Neighbors Project should continue, be implemented and be as well an example for joint programs between the Palestinians and Israel in the Gaza Strip. But without the support of the international community including the Arab League it will be very difficult to achieve. I urge the international representatives that are sitting here in the table to continue the support of your countries for our region and for the whole world because I believe if our region will prosper, I believe peace will come and I believe peace to the world will also come.

I would like to thank again for the hospitality of this important conference, to thank our fellow Palestinian friends and to thank the representatives of the international community.